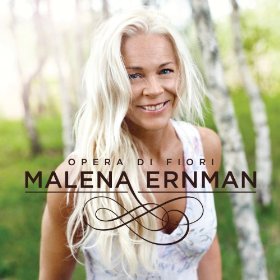 I have recently discovered this singer and I am completely enamoured with her voice- what a refreshing artist! After recently discovering clips on youtube I bought her Opera di Fiori CD (2011) and was just bowled over. The timbre tells us that she is a fundamentally a mezzosoprano, but on this CD she reveals an extraordinary upper extension and sings mezzo and high soprano roles with equal aplomb. So we get the trouser role Nicklausse's romance "Vois Sous L'Archet Frémissant" from Les Contes D'Hoffman sung with rich mezzo tone, but also Olympia's aria from the same opera, glowingly dispatched. We get both the Habanera and Seguidilla from Carmen but also the Queen of the Night's second aria, "Der Hölle Rache". I'm struggling to think of anyone else on the international opera scene at the moment who could be as convincing as Ernman is in both repertoires.

The timbre of the voice is sensationally beautiful - smooth textured with a gorgeous vibrato that can be removed or added to at will, a limpid legato and great dynamic control, excellent intonation and the sound even and well integrated across all registers from a very strong chest register to a gleaming top. She has a remarkable technique, supporting the voice in a three octave plus range - I have never heard Olympia's top notes so shiningly or solidly projected. Maybe the finest track on the disc is Vitellia's aria "Non Più Di Fiori" from La Clemenza di Tito which is ravishingly sung, and the low notes are wonderful to hear with a mezzo's chest register. "Der Hölle Rache" also benefits from the mezzo timbre in the lower portions, and sounds genuinely furious for once. The top F isn't exactly in tune the first time it comes, but she nails it the second time, and once again, the ringing vibrato up there is so satisfying to hear. The fact that there are these occasional very slightly flat notes shows that the recording has not been messed around with in terms of correcting the tuning digitally - something which is absolutely rife in some more famous singers CD recitals - and from live performances on youtube we already know that her intonation is generally faultless.

Neither do we get cookie cutter performances - in all of these very famous arias we get original choices, some risk taking, and characterful, interesting interpretations. So in Bellini's sometimes all too familiar "Casta Diva", here gorgeously sung, the phrases for once feel new and unexpected even although she is doing nothing radical, and in the Carmen arias we get some beautiful colouring of the line and interpolated notes. The only thing that I don't love is the aspirated coloratura and occasional lapses in pronunciation (especially in the sole German number here). But this seems cavilling when there is so much to enjoy.

As a lovely bonus we get two duets with Anne Sophie von Otter - the Barcarolle from Les Contes D'Hoffman and the Flower Duet from Delibes' Lakme. More beautiful renditions of these bonbons are difficult to imagine.

Here's "Non Piu Di Fiori", the aria from La Clemenza di Tito. Check out the superb chest register from 3:20, and the beautiful soprano like top at 4:30.

This Glyndebourne Fledermaus reveals already early in her career an eerie talent for physical and vocal characterisation, as well as a lack of vanity and sense of fun. The extremity of the musical choices I think are entirely fitting for this character, but are also not representative of the singing on the above CD.


Here she is in a live performance of Olympia's aria showing not only astonishing vocal control in high soprano music, but again a spontaneity and sense of fun that is infectious.

I have also ordered her Dido and Aeneas with Christopher Maltman and judging from this clip I am in for a treat. Comparing the voice here and in the present recording, it seems she pares down the voice significantly for the baroque repertoire.

Can we get her at the ROH very soon please?