DVD Review: From the House of the Dead 2007 Vienna Festival with Boulez and Chéreau 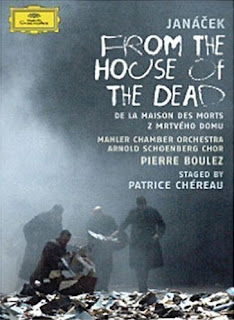 
"Into the minds of criminals and there I find a spark of God. You will not wipe away the crimes from their brow, but equally you will not extinguish the spark of God. Into what depths it leads - how much truth there is in his work! See how the old man slides down from the oven, shuffles to the corpse, makes the sign of the cross over it, and with a rusty voice sobs the words: 'A mother gave birth even to him!' Those are the bright places in the house of the dead." *


In an operatic oeuvre that can already seem thin on conventional operatic niceties, in From the House of the Dead, Janáček goes several steps further along his path towards his vision of artistic truth, stripping the score back to the absolute essentials, paring down his musical language to its strangest, toughest, most intimate, and as it turned out, final iteration. The result can be painfully bare and raw, more so than ever before, and the total lack of sentimentality, sensationalism or pandering to an audience's need for orchestral exaltation and rapturous vocal catharsis sets him apart from virtually every other great opera composer.** And to a greater degree than any "Verismo" composer, Janáček is committed to putting real characters on the operatic stage; in From the House of the Dead by portraying people at their lowest ebb, he creates his ultimate paean to the value and beauty of all human life, in all its difficulty, pain, humour and occasional joy. In this score, moments of softness and wonder are minute and fleeting where in his previous operas he may have offered a sonorous paragraph of beauty (if the drama called for it!) against his oft uncompromising realism. Some listeners will find it all too much to bear, with too little to sustain them, the wild collage like patch work of the score remaining steadfastly tonal but rarely ingratiating, especially in Boulez's modernist treatment of it. But the richness and gawky beauty of this oddest of operas is there for any who are open to it and willing to persevere, and I and many others are convinced that it is a very, very great masterpiece.

In this production Patrice Chéreau and Pierre Boulez are reunited 30 years after their landmark Bayreuth Ring and the result is again extraordinary. Janáček's last opera is based on Dostoyevsky's novel of 1861 which was written after the author's experiences of prison. The dramatic structure is elusive and extremely unconventional, which is to say that there is little in the way of conventional plot - there's a number of prisoner monologues of increasing length, interspersed with crowd scenes and various interactions and conflicts, and a sick eagle's recuperation binds beginning to end. But this material needs a masterful director to make sense of, and Chéreau does really admirably: the clarity and vision with which we are lead through the opera is at times even revelatory, Chéreau choosing to focus things on certain members of the ensemble cast without losing the overall meaning that Janáček is aiming at. For these men, time has stopped, and most survive not just by recounting, but by reliving their fractured pasts - lost loves, jealousy and tenderness are common themes. In this production, Chéreau catches almost every moment with unstinting intensity, with character regie that is far more detailed than one is used to in operatic productions, and there isn't a weak link in the cast. The sets by Richard Peduzzi are superbly evocative whilst being suitably minimal and monotone.

As the disturbed Skuratov, John Mark Ainsley is the only "household name" in the cast, and he turns in a superbly detailed and touching portrait of the madman. But this level of quality is mirrored in the rest of the cast and it seems foolish to pick out individuals in what is so obviously an ensemble effort. Crowd scenes are well handled too, with a clear social hierarchy amongst the prisoners, camaraderie and tensions never seeming stagey or forced. The childlike joy that radiates from the prisoners in the opening scene from the simple act of touching the eagle is wonderfully observed. The general quality of the voices is good, more glamorous voices would seem completely out of place and beside the point. Something to note: Boulez has famously mixed attitudes to opera and its artificialness and it was surely his idea to cast the young boy Aljeja as a tenor rather than a mezzo as in Janáček's score.

I imagine that this was a near perfect theatrical experience in the opera house, but unfortunately the video direction occasionally gets in the way - very often it's a bit too frenetic, with too many cuts, and lots of shots where the camera is on the stage so you feel like you're in the centre of the action. It's clear that immediacy is being aimed for, but it actually makes things unclear sometimes, in an already hard to follow opera.

Although this might seem to be a strange choice of repertoire for Boulez, of all Janáček's scores this is surely the one which Boulez has most to say about, with its stark timbres, violent energy and thrusting rhythms and the Mahler Chamber Orchestra bring an appealingly fresh touch to this unorthodox music, Boulez firmly ensuring that nothing even remotely lapses into sentimentality. The classic Charles Mackerras recording with the Vienna Philharmonic is perhaps unsurprisingly more lyrical, and brings greater contrasts of light and darkness as well as more accomplished singers to the work. More importantly the profound affinity and extremely deep understanding of the idiom as well as peerless orchestral playing keeps Mackerras a firm first recommendation, but Boulez's very different perspective is extremely welcome as a point of comparison and must be recognised as a major addition to the discography of this work.


*These words were found on a piece of paper in the clothes of the deceased Janacek (with thanks to Gavin Plumley for supplying this translation)
**not that he can't or won't compose music like this - Vixen, Katya and Makropulos all contain truly ravishing music, and in fact there's barely a note I don't love in these operas - but he's never consciously "giving us what we want" like Puccini or Strauss or Mozart obviously are, and surely even Wagner does occasionally.